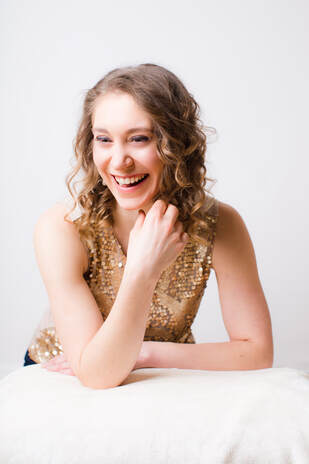 ​Merel van der Knoop is our  MD, having led the choir covering for our previous Music Director’s maternity leave.  She gained a Bachelor's degree in solo piano from the Rotterdam Conservatoire in The Netherlands and then went on to study Piano Accompaniment at The Guildhall School of Music and Drama from which she graduated with a Masters in Music and a Masters in Music Performance, Guildhall Artist degree.

Merel currently works as a freelance accompanist and vocal coach besides teaching singing, piano, leading choirs and being staff accompanist in two private schools in Wimbledon. She is also a classical artist on board P&O cruises and took up the position of covering Head of Music at the Hall School in Wimbledon from 2016 – 2017. In 2021 she became MD of the South London Military Wives' choirs.

Besides being active as an accompanist Merel also took acting classes at Morley College and City Lit. She was part of the City Lit Rep Company which took Hamlet to the RSC Open Air Festival in Stratford upon Avon. Merel currently also works as an extra for tv commercials and feature films.